The housing styles, construction and building techniques of  China's minorities vary from region to region depending on climate, availability of materials, and geography of the land. 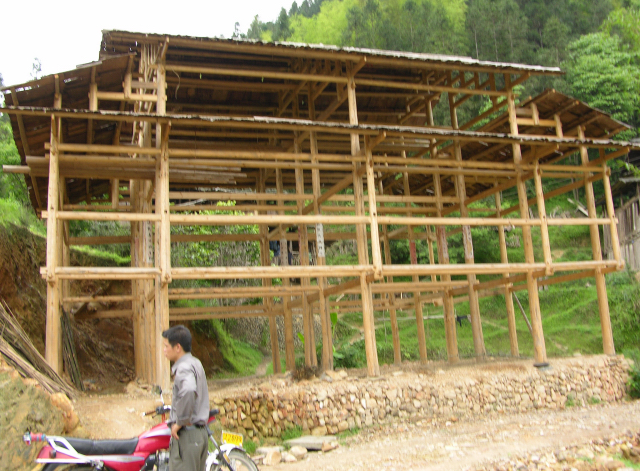 Typically, most minorities use a Chinese variation of post and beam technique with mortise and tendon joinery.   Having always been one who could not pass up a construction site, I took the opportunity to ask questions and take pictures of this house under construction in a  Zhung ethnic minority village outside Sanjian.    The structure is at least 45 feet wide.  The scale is visually thrown off  because, though he looks much closer, the man is the photo is actually about 20 feet from the front of the structure.

The massive timbers may be cut from a considerable distance away and are transported by the local villagers.

The ridgepole is considered to be very important and has much spiritual significance.   It is carefully chosen by the spiritual leader who may take a week or more to find the "correct" tree.   This tree can NEVER be allowed to touch the ground or it will lose its power.  Keep in mind that this tree may (and probably was) growing high up on a steep mountainside, and there are no heavy equipment or power tools being used.   The entire village is involved in felling, supporting, and transporting this tree.   It is a very dangerous process.

It takes a week for a village to raise the posts and beams into place.  After that, it is the home owners responsibility to finish the construction.  He may do the work himself or hire others to work for him.

The posts are placed on a flat stone which is buried to be almost level with the ground.    I asked if they had "tiny insects which live in the ground and eat wood"---termites.   Yes, they are alive and very well fed under the minority villages.    It is a serious problem for the villages.   I was asked what we did about them where I came from....and I did feel a bit uncomfortable explaining that put chemicals into the ground which poisons the insects.   Some minorities believe that spiders are past relatives who come back to watch over their human off-spring so the "poison" idea was received with looks of horror and disbelief.

This picture is of the support structure  for the roof.   After the support beams are place, bamboo strips are nailed on top of them and these are covered with large wood shingles which are then covered with roof tiles.   No, the writing on the red paper is not a building permit....it is prayer to the ancestors.

Wind and Rain bridge is one of the required elements that marks the entrance to the Dong minority village. 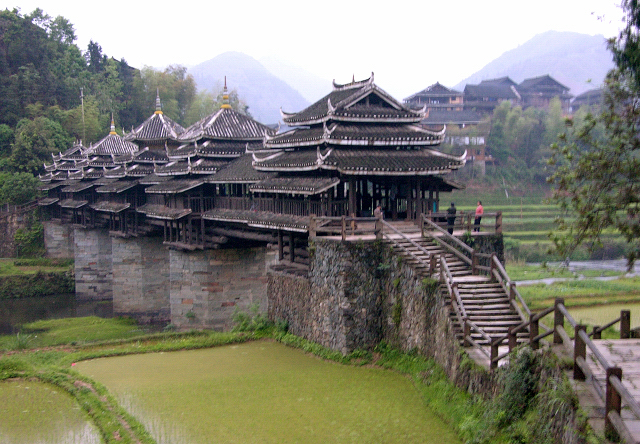 Cheng Yang Wind & Rain Bridge, is located in Cheng Yang village, where belongs to San Jiang county. It is the biggest wind & rain bridge in Sanjiang.
It was built in 1916, it took the villagers over 10 years to build it.   The bridge is 64.4 meters long(70 yard), 3.4 meters wide(11 feet), 10.6 meters high (35 feet).
The amazing part is, there is no nail with the whole instruction.

the Qing dynasty nobles house in Tia Jiang which is now a museum.