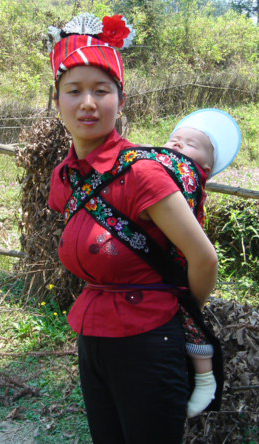 Each minority group has its own distinct style, shape, and surface decoration for their baby carriers.   Some groups have one piece carriers and other groups have a separate piece which is attached and used as the baby's head covering.  The strap configuration also varies with the minority group.

Pictured here is a Miao mother and baby showing a baby carrier with one pair of very long straps attached at the top.  These straps are wound over the mothers shoulders, down and cross over the chest, then back around the baby's bottom and back around to the front being tied at the mothers waist.  Many groups use this type strap arrangement.  Other groups make carriers with a second set of straps at the bottom.

Generally speaking, the farther south one goes, the smaller the baby carriers become.    A baby is held firmer in a small carrier, and is therefore more secure against the mothers body while she is climbing the steep mountains in the south.

As a westerner, it appears that the really tricky part is putting on the carrier with the baby.  For minority mothers, this task is considered as a natural motion and just another part of daily life.   Minority mothers do not seek and would certainly politely refuse any offer of assistance with this task.

The baby carrier is placed inside up either on the ground or any available surface.  The baby is placed on the carrier, facing up.  The mother tightly tucks the straps of the carrier into her right hand so that the baby is then securely wrapped in the carrier.    Then she leans over dropping her left shoulder and....with her right arm slings the baby and carrier over her left shoulder and onto her back.  While still leaning over she very quickly secures the straps.

In the west, this action would probably result in a visit from the child protective agency for child endangerment.   But I suspect that no minority mother has ever dropped her baby while in the process of getting baby and carrier onto her back.