The Chinese ethnic minority groups often use textiles to express the customs and "stories"  of their culture.  Typically, each group tells and retells the myths of the past and the hopes for the future by using various embroidery techniques on almost every textile they make.   Of course, the more important the textile, the more symbols and legends are depicted.    Those textiles used for babies and very young children are often of primary focus to a young woman.  Baby carriers,  baby blankets, booties and hats seem sometimes alive with the mothers concern for the health and good fortune of her offspring.  Costumes for festivals are also heavily adorned with embroidered symbols of ancestors, heroes and evil spirits.  Although Tribal Arts collectors are aware that the pictures tell a story,  many do not know the actual significance of the figures depicted on their prized textile.   Hopefully, this page will be a start to filling in some of those gaps.

"The cat and Rat"  is a Miao legend.  Photo is taken from Miao minority festival banner textile.   The following story is translated by Jessy

Originally, rat and cat were very good friends, and rat was same sized as cat. But rat was a little bit smarter.  One day, they played along the river, and rat wanted some fish, he asked cat to dive into the river to catch. Cat did so, but could not came out of the water.  Rat did not save the cat, but run away.Finally, cat was saved by human being. From then on, cat started to hate rat very much, because he did not save him when he was in danger, and decided to catch rat.  Since then, rat all the time hide in some where to avoid being caught by cat. To be able to hide in everywhere he needs, rat’s size became smaller and smaller.

When a Miao couple wants to have a child but remains childless, they must go at night and steal a pumpkin.   Then they invite all the friends and relatives to celebrate and welcome the (baby) pumpkin into the family.   This shows the spirits how much they will love and care for a baby. 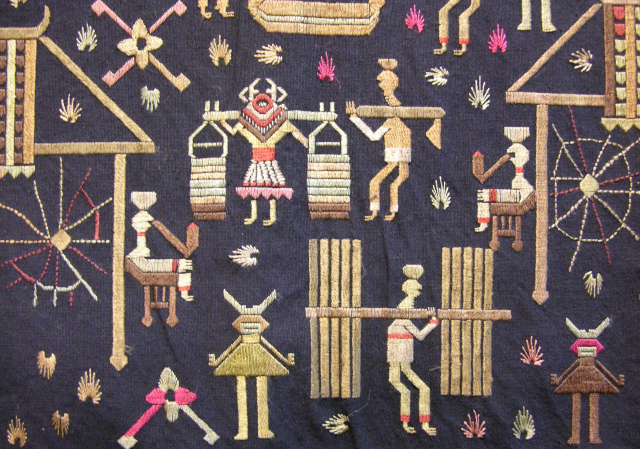 The symbols of village life are embroidered on a  Miao  baby carrier.

Spiders are considered as possible reincarnations of past relatives, returned to keep watch over the family.  The webs are left undisturbed.

Holding hands is common border on Miao baby carriers and baby blankets.   It depicts the Miao  following the ancestors commandment for the group  to stay together and help each other.

The Miao legend of the frog queen is symbolized as a frog with a human woman's face in many older Miao textiles.   Jessy and I were told this story several years ago and as best as we can remember... 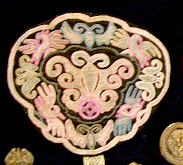 Butterfly myth and explaination by Jessy.  Butterfly Mother, as one of the earliest ancestors, she was born from the center of maple tree, she flew over and over the water, finally fell in love with the bubble.   She laid 12 eggs, bird helped to hatch the eggs, most of the eggs were animals like water dragon, etc., the last egg was Miao people.

Notes from Susan:   The Miao refer to the bird and butterfly as Mother and Father and elements of the Miao creation myth are depicted  in their textiles.   Using surface embroidery techniques, they often picture birds and butterflies.  The creation bubble is  represented by  round silver ornaments.